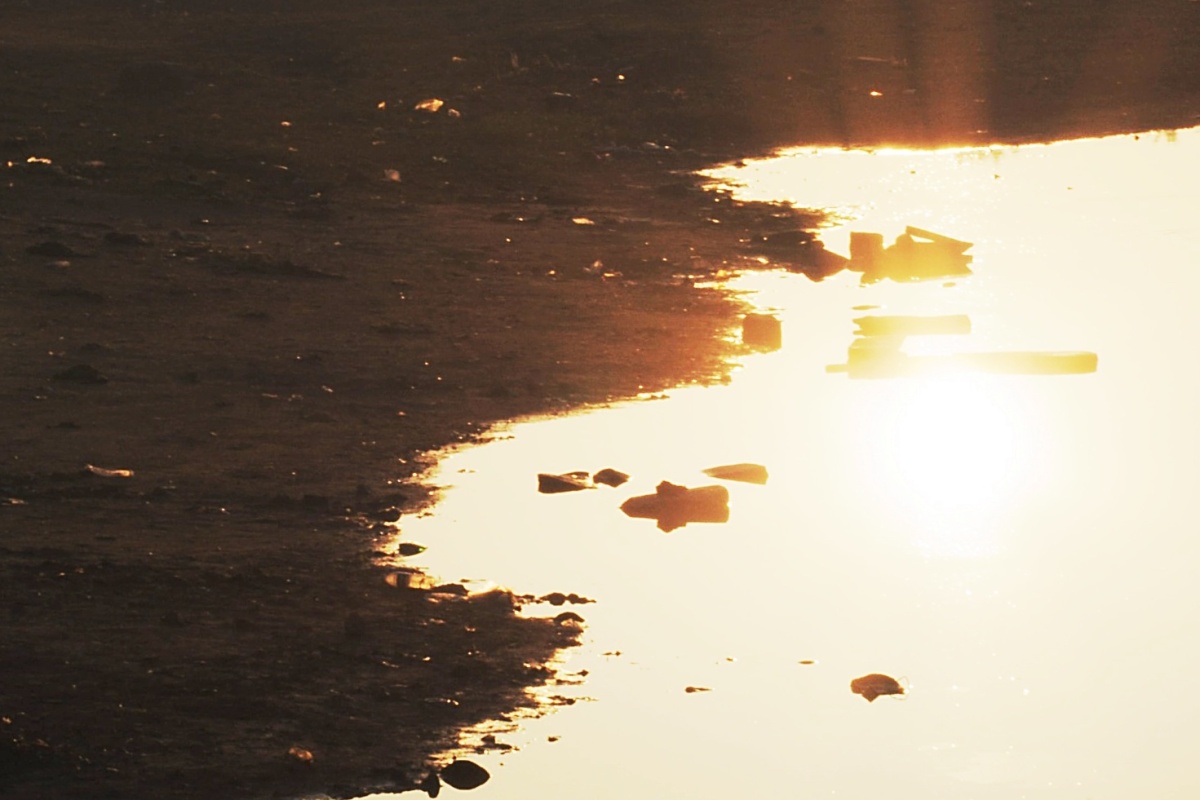 I was contemplating whether to go to Bangalore by the National Highway (NH) or by the less known State Highways(SH). These are two routes to travel between Bangalore and Coimbatore, two cities in the southern part of India. While most of my friends and frequent travelers recommend NH7, I always prefer the less popular SH. I have traveled by both these routes many times. How do I feel while travelling through these two routes? [the RED dots represent the NH and the GREEN dots represent the SH] 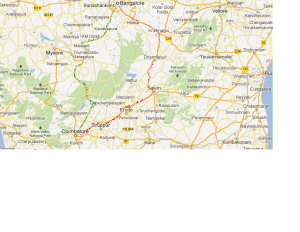 The National Highway is a beautiful piece of concrete infrastructure. This has opened up the transport from North of India to the Southern tips of India. Really a masterpiece! The government spent billions in making these National Highways and still continue to collect toll from every user of these roads. Between Bangalore and Coimbatore there are about 10 toll collection points on the National Highway. It has six lanes – three each side – separated by well maintained medians.

The State Highway is a beautiful piece of meandering tarmac through nature at its best! The road is very even and smooth, except for a very small stretch of uneven terrain. There is no median to separate the traffic on both sides. There are no toll collection points anywhere on this route.

This brings to an end the physical differences between the two routes. Now, going on to describe the feeling I get while travelling through both these routes – let me start with the NH. Bangalore is known for its traffic jams and not so good traffic discipline. By the time you turn into the NH, you would have already got a taste of couple of traffic jams. This pent up agony and frustration is amply displayed by all the drivers by the time they reach the first toll gate. All the 4 to 5 toll-gates would be lined up with long queues of all sorts of vehicles. You will always seem to feel that the lane next to you is going faster than yours – Hobson’s choice! The mental and sometimes the verbal cursing starts from here. To add to this, often you see one or the other truck drivers haggling with the toll gate collector on the toll amount, totally impervious to the long trail of vehicles behind him! On one occasion, I had got down from my car and walked past some ten odd vehicles in front to see what was all the huge argument at the toll gate? I tried to impress upon the truck driver that he has to pay the toll or he is going to block the road for the rest of the day! Wow! it worked and he paid up and the line cleared! Now what?.. the already pent up frustration has now exponentially increased two folds! Now you have three lanes and it is free for all. Every one of the user of the NH feels that he has all the right to take absolute ownership of the entire road – now that he has paid the toll – and he will freak out either from the left or from the right (in India it is right hand driving, so one has to stick to the left side of the road), with the only ambition to be the first in the line of vehicles. He however does not seem to realize that the same thought process is going on in every single driver on that road! So, he has competition! Now the fun of driving is gone.. it is now a blatant display of car power (vehicle power).. a Ford 2006 model overtakes a Toyota 2012 model…. finished.. you should see the look on the face of the Toyota driver! ..within minutes he would slam his gas pedal to the floor and you see him trying to crawl from left and right and left and then.. finally he makes past the Ford 2006.. It is a cyclic reaction and you can see immediately a lot of followers for the Toyota 2012 driver. Speeds of 120 kmph (kilometers per hour) are a bare minimum to show one’s superiority on the road. This mad race goes on till you hit the next big town or the toll booth. Your speed has now come to a crawling 10 kmph (if you are lucky; else it can even go lower than that!). Then you see the local buses that have a mandate to reach the finish line ahead of the bus which had started earlier! If you glance at the faces of these drivers of these buses, you will feel as if they are flying a fighter jet. They will be always at the edge of the seat with one hand always on the air horn lever, blasting away for clearing the road ahead… they will overtake you from left or right or even nudge you aside to speed past and brake at amazing stopping powers right in front of you to pick up the odd traveler who had flagged the bus to stop. So by now your frustration level has increased exponentially 10 times! One does not realize that the average speed that one gets on this route is about 60 kmph. so you can guess the speeds of 120 kmph and how short lived they are! On an average you will need six hours to travel this route..

I have said a lot about this route.. now let me go over to the other route (the one I always like). I start off early morning to get a glimpse of the morning sun casting its glory on the country side. Here is where my photographic mind takes over. I observe the reflections of the sun on the rivers and the ponds by the way side. 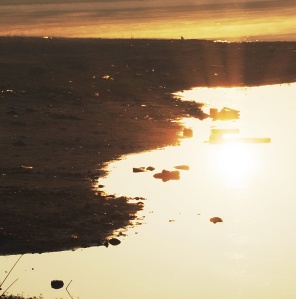 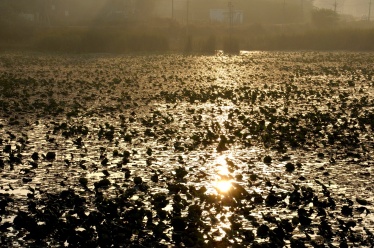 The road twists and turns through the picturesque country side and the sun climbs up in the sky to add more reflections on the water by the side of the road.. 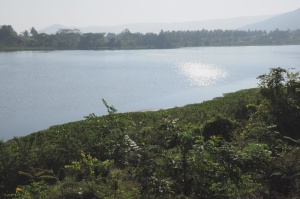 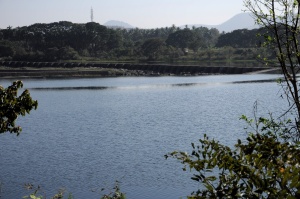 I stop by a line of trees dotting the two sides of the road to have my packed breakfast. I could not concentrate on the food; since the scene in front was more fascinating with the sun casting shadows of various forms on the road.. 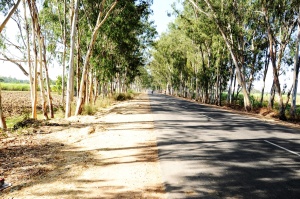 On this route you would not see any speeding vehicles.. only some local villagers shuttling between two villages.. 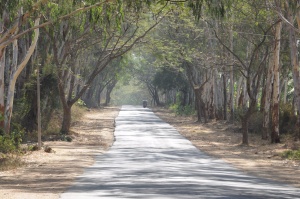 ..You continue through the thick forest and see occasionally some wild-life. If you are lucky you can spot elephants, deer,  bear, the Indian buffalo and many varieties of birds – big and small…finally you reach the tallest point on the ghats.. Dhimbam..

this point is about 1100 meters above sea level.. there is an old rusted board indicating this on the side of the road.. 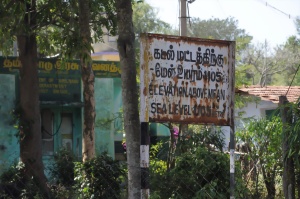 there is a way-side tea shop,  where I sip a steaming hot glass of tea 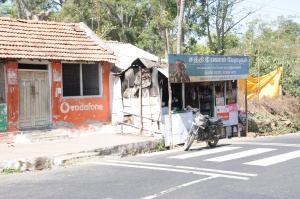 before starting the decent of the 27 hairpin bends to reach terra-ferma. The road has sign boards all along to respect the nature and go silently without disturbing the animals. By the way, the animals have the right of way on this road.. 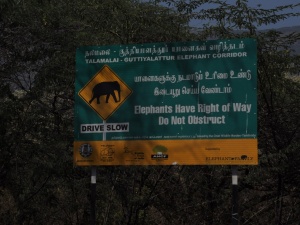 this is very true.. recently there was an accident on one of the bends and traffic slowly piled up on both sides well into the night.. one heard of elephants wanted to cross over to the other side of the road and were obstructed by the line of trucks.. one baby elephant tried nudging a truck; but of no use! The driver of the truck along with the drivers of the other trucks moved their vehicles around to give some way for the elephants to cross the road. Once done, the elephants crossed over to the other side of the road..picture reproduced from a local newspaper. 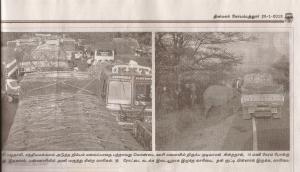 Once you reach the plains, picturesque temples beckon you. 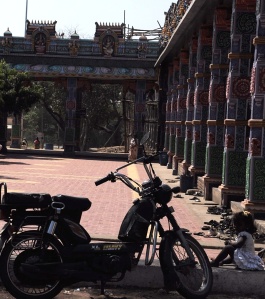 Then there are way side guardians of the local villages. 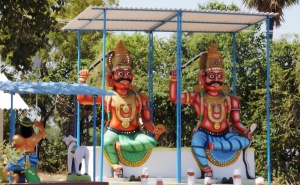 It is believed that they guard the village from untoward happenings and from evil-eye..as I travel on, my eye catches a line of terracotta horses; again, the deemed protectors of the village.

I reach home completely relaxed and fresh from all the wayside scenes! I check the time and see that I have taken just about six hours to travel, including all my halts to take pictures and maintaining a constant speed of about 80 kmph.. bottom line.. more mileage due to constant speeds of 80 kmph, no toll (saving of about 10 USD) and of course enjoy nature all the way!